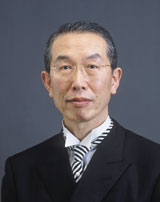 President Nichiko Niwano, the first son of Founder Nikkyo Niwano, was born in 1938. He entered the Faculty of Buddhist Studies at Rissho University in 1958. After graduating from the university's Graduate School in 1968, he entered Rissho Kosei-kai and held the offices of head of the Dissemination Department and president of the Rissho Kosei-kai seminary.

On November 15, 1991, the birthday of Founder Niwano, he succeeded to the presidency from him in the ceremony of the Inheritance of the Lamp of the Dharma.

Since he was inaugurated as president, he has continued to disseminate the teachings throughout Japan, emphasizing the necessity of enriching one's own inner spirituality by assuming modest attitudes. He firmly believes in walking on the Buddha's Way side by side with other members. 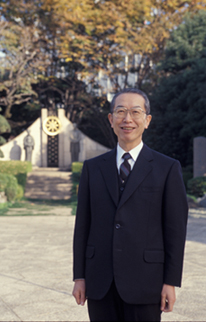 President Niwano wants Rissho Kosei-kai always to walk correctly on the Buddha's Way by following Founder Niwano's teachings based on the Lotus Sutra. He says: "The first principle of Buddhism is to revere with a warm heart and a flexible mind all things that have life. For that, it is essential to recognize the truth of transience." Thus he teaches members that they should become aware of the value and wonder of life.

His writings published in English include Modern Meditations, The Inward Path, and My Father, My Teacher.